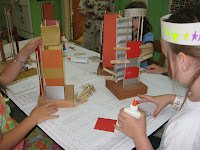 Seeing the progression of Piet Mondrian's work and how removed visual "noise" to reveal what he viewed as the "essentials" in a landscape led to three projects that explored the use of horizontal and vertical lines as well as the simplification of color. I wanted to build a bridge between the flat to the 3-dimensional design, essentially to turn a Mondrian on its end and giving it dimension. I wanted the children to explore the beauty revealed in simple lines and shapes and to actively think about the world in terms of horizontal and vertical lines. 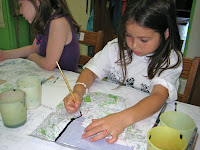 The first project began with squares cut from Washington Metropolitan road maps. The children used paint to eliminate the details from the map using white and black paint. A plastic overlay was used to look at those shapes in a different way to add essential colors--red, blue, and yellow.
The next project brought us closer to giving lines dimensions through relief sculpture. That said, my primary goal was to assign new meaning to the use of color. The artists painted chopsticks with high gloss black acrylic and these became the shimmer and shadow of late afternoon sun on water. 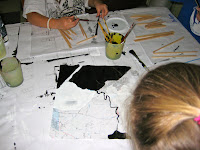 The final project on redwood bases finally sets neo-plasticism concepts on its ear. The children were thrilled to imagine the Mondrian would be hopping mad about the way we were using shape and line. Imagining boogie woogie city streets reaching upward and moving backwards was also a lot of fun. We also used softer colors and layered the rectangles and squares. The finished pieces belie the difficulty the young artists encountered in trying to attach and glue precision-cut shapes to soaring, but very uneven skewers and dowels stuck into the wooden base. 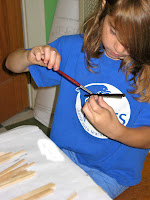