Andy Would Have Liked This...

Andy Warhol would have liked the process or how the whole project started and then unfolded. It was fast. It was instant. And it was right NOW. 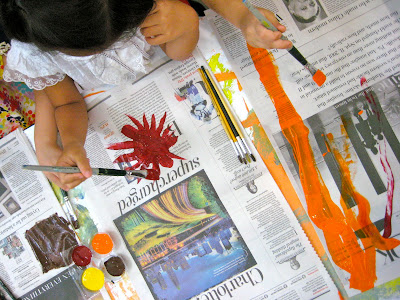 So this is what happened...I have most of my favorite art museums in my facebook feed. Start right there -- facebook! Feed! Warhol would have thought that was a fantastic idea!

The National Gallery announces its upcoming shows--Warhol's Headlines, opening September 25, 2011. Why wait? I have a whole recycle bin of headlines. Recycle bin? He probably would have found that a hoot as well. I went into our library collection, searching for a book a former member family had donated, Andy Warhol: Paintings for Children (Adventures in Art.)  It doesn't include any of his Headlines. It does feature the silk screens he produced of the panda, monkey, and other child-like images in a color palette similar to what we were currently offering in our project center. Done and done, but I really wanted to find more.

Next stop, iPad app. Just the whole idea of iPad, iPods, pings, feeds, tweets etc. would have just blown the  Factory denizen's minds. So, we checked in with the iPad and an app also brought to us by a former member family (I teach at a cooperative school and the families are considered members of the school). The app we used was Art Authority. It is a virtual art museum with rooms filled with art. Although there were not any of his Headline works featured there, we were clearly on the trail to the BIG IDEA. We talked about shapes and lines and about making the newspaper sheet more than the thing in front of us. We talked about letters, words, and numbers. We talked about "getting what you get and don't get upset" (I only had 18 front page sections, 1 per kid). And then we got to work.

I think what Andy would have really liked was the collaboration that naturally occurs when people are working together towards a common goal and then how each person's work becomes something unique and is expressed through a shared, visual language.