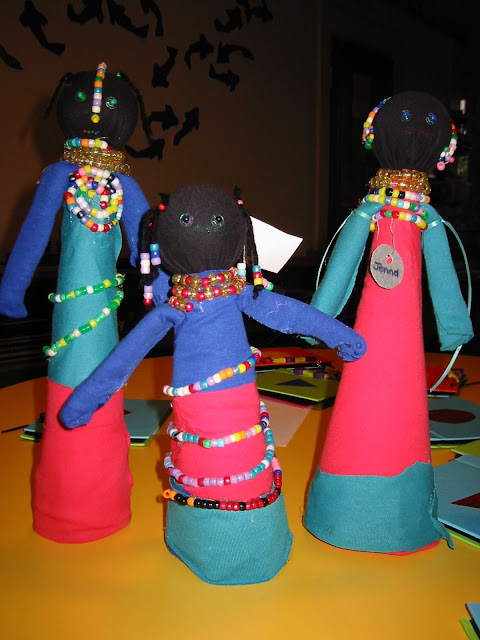 One year, we made dolls. Lots of dolls. A grandmother donated a treasure trove of crafting materials. Oh, the adventures we had! I was going through my photos and these popped up. I don't have photos of the construction -- back then digital cameras had just come out and we were constantly borrowing them from people so photos are a precious few.

These Ndebele dolls are made from cardboard thread cones. The arms are of rope. The heads are styrofoam balls covered in jersey held together with a string. The thread cones are open on two ends and we were able to pull the string through the top opening and glue the end of the string at the bottom of the cone to secure the head.

The jersey fabric scraps were cut to fit by the children and they used glue guns to glue the fabric on after wrapping it. The beauty of using jersey is that it stretches and holds temporarily when wrapped -- long enough to get that hot glue on! The beads were threaded on mostly wire though some children chose to make hair using yarn. The beads were then connected to the dolls using ball point pins. Sequins and pins became eyes.
Posted by Lesley at 1:10 PM