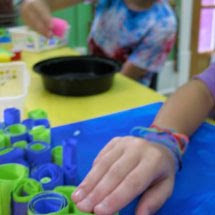 I planned the last session simply as "texture". In this case, it really was conceptual imaginings/riffing rather than specific plans for actual projects. The subject matter was designated during a very busy part of the school year. Ideas and inspiration were close to tapped out for that last week of camp.
Why reinvent the wheel? I thought we could revisit one section of a long ago art camp weekly rotation in which each week-long session was spent exploring line, color, shape, and texture. Up went texture on the website and 9 students arrived on site Monday morning, ready to go. What's texture? 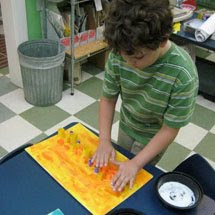 Again, with the lightning strike -- thanks for that! I cashed in my spa treatment gift from the 2010 families -- thanks for that! And as I was sitting in the pedicure chair, I leafed through Architectural Digest (who cleans those houses?) and came upon the mini-section focusing on "finds." Bingo. There was a work
by Amy Genser featured in the mag that sang out, "Get your texture, here." 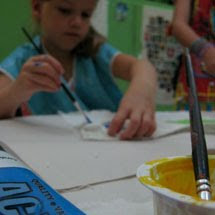 We were off and running. We like to have three projects for the week. The Genser-inspired one took so long though that the third, a painting on fabric, was still drying at pick-up time on Friday.
Posted by Lesley at 12:37 PM