What I learned at Art Camp 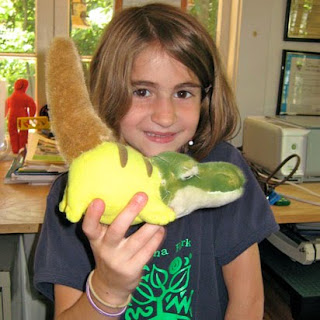 This may have nothing to do with making art or maybe it has everything to do with making art.
Thinking about the source/muse for creating art is one of those endless supply discussions. At AVAM, we learn it is a burning need, really a fire, that forcefully and continuously compels the artist to express ideas using all kinds of materials, tree roots, toothpicks, pennies, nickels, wires. The materials are immediate and AROUND. They speak directly to the artist.
An alum of the school visited me just before we published our content/calendar for the summer. This former student had a creature in hand she had created from a combination of stuffed animals. I could see an Elmo and Mickey Mouse in its limbs, there were other parts not so recognizable. Her mom told me she cuts up the toys and sews pieces back together in different configurations. Cool. That speaks to the child artist. And so a session was formed and the kids did indeed love it. Recycle, Repurpose, Reuse. We created art with things that were AROUND and speak directly to the child artist.
Here is the other thing I learned at art camp this week. It is also about the "why" of art--this time about leaving a mark on the landscape of human experience. Art resonates, it captures and expresses. This moment also came from the child artists, yet in the most unlikeliest of expressions.
A robin died during art camp. This robin had been holding on since the end of school actually. As each group came and went, it hopped in and out of the plantings. Its parents diligently distracting us from its whereabouts. We left shallow pans of water and seeds, regularly turned over the soil to expose insects and worms. The robin's parents did not abandon it either.
In this third week though, I knew we were heading toward the end because it was moving more slowly and the blue bottle flies were already buzzing. I made sure to prepare the children for this event. We found "him" on Friday, the last day of camp. I say him because the children applied a gender at death, which probably holds its own significance. The children buried him and created a grave marker, again with things we had AROUND, so a more snazzy grave marker has never existed. But this was not the significant thing to me--it was what the children RECORDED on the marker. 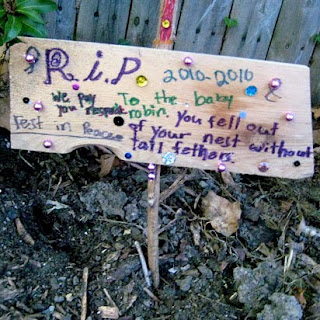 It was the robin's story and in that story is the artists' expression about the human experience. It is what we DO.
Posted by Lesley at 7:43 AM